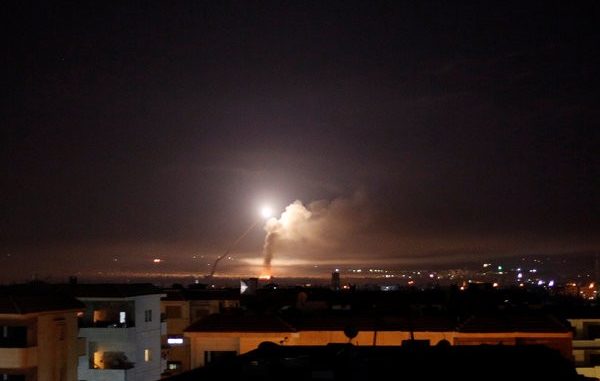 Israel’s military carried out strikes against Iranian targets in Syria in response to an alleged Iranian rocket attack on the occupied Golan Heights.

The attack on Syrian territory was one of the largest in recent years, according to an IDF statement.

The missiles reportedly launched by Israeli warplanes from outside Syrian territory, took place late Wednesday evening into early Thursday morning and targeted the Quneitra and Homs areas near Damascus.

Syrian state media said that the army’s air defences had repelled the “Israeli aggression” on Syrian territory, shooting down scores of missiles. They added that some of the missiles had hit a number of air defence battalions, radars and an ammunition depot.

The Israeli army said it was attacking “Iranian targets” inside Syria. It earlier said its positions in the occupied part of the Golan Heights were targeted by some 20 missiles launched by “Iranian forces” from the Syrian-controlled part. At about the same time, Syrian media reported Israeli shells hitting the country’s territory. Neither of those attacks resulted in any casualties, according to official sources.

Israel has been claiming that Iran is setting up bases of operations in Syria in order to stage attacks against the Jewish state. It has launched numerous air strikes against Syrian government-controlled territories, targeting alleged Iranian positions.