Most Christmas customs like the Christmas tree, singing carols or exchanging gifts, which are observed in Western countries, have become universal.

Yet, some countries have their own unique Christmas customs passed on from generation to generation, not affected by the universal Christmas norm.

In Greece there are traditions that are millennia old and, but an Orthodox country, they are observed in the New Year with the feast of Agios Vassilis (Saint Basil).

Today, some of them are not practiced in the big urban centers, but in the provinces most of them are still observed zealously, as tradition dictates.

The decoration of the ship is an age-old custom that remains as a celebratory standard in many households this time of the year, although it has been gradually replaced by the Christmas tree.

Greece is surrounded by sea and boasts 6,000 islands. Naturally, Greeks have a very long and illustrious history as seafarers. Therefore Christmas traditions are a tribute to the sea as well.

According to tradition, the ship symbolizes the new direction that the birth of Christ gives to human life. It is a custom of old, when children made their own toys.

Up until 50 years ago, that is, until the first post-war decade, the Christmas ship was found  in many Greek households and in the hands of children, who carried a ship when they toured the neighborhood, singing carols.

In some areas, mainly on the Greek islands, they still decorate the Christmas ship, while in recent years there has been an effort of several municipalities to bring this old custom back to replace the Christmas tree. 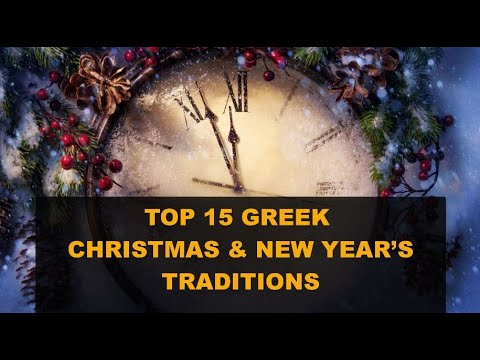 Greek carols sung by children one of many Christmas customs

Carols, which are folk songs of greeting and praise with Byzantine roots, are sung every year, mainly on the eve of Christmas, New Year’s and Epiphany.

The carols are sung mainly by children, either individually or in groups, as they visit houses, shops, and public spaces accompanied by the traditional instrument of the triangle, but sometimes other musical instruments, such as accordion, drum, guitar, or flute.

The kids go door to door and knock. The person who opens the door and lets the children sing the Christmas carols then gives them a little pocket money.

Children do this every year to earn money to buy Christmas presents on their own.

Christopsomo (The Bread of Christ) another cherished Christmas custom

On Christmas Eve, the women of the house made the Christopsomo in a ritual that stands out because it is practiced with great reverence and patience in this busy time of year.

Usually round in shape, an integral feature of the Christopsomo is the engraved cross on top of the dough. Intricate pieces of bread dough are added to the to celebrate all the things that make up Christmas.

In many parts of Greece there are variations of the custom. The most unusual perhaps being a Kefalonian custom in which the whole family gathers in the house of the oldest member, places three unlit torches on the floor to form the letter X and places the bread on them.

Then they form a circle around the Christopsomo and rest their right hand on it. Then the landlord pours oil on the torches and puts them in the fireplace. Then he cuts the bread, hands it out to the family and dinner begins.

In Crete, the preparation of Christmas bread is a whole ritual. The most expensive ingredients are used for its preparation, such as finely sifted flour, rose water, honey, sesame, cinnamon and cloves.

When the dough is ready, the women take half of it and make a bun, while with the rest they make a cross with strips and place it on the bread.

In the center they place a white nut; on the rest of the surface they draw shapes with a knife or fork, such as flowers, leaves, fruits, symbols of abundance for the desired animal products and the harvest.

The “Christmas wood” is burned throughout the festivities to warm the hearts of the faithful in Greece.

On Christmas Eve, in the villages of Macedonia in northern Greece, the man of the house goes out and looks for the most beautiful, strong piece of wood from a pine or olive tree — the so-called Christoxylo.

The selection should be quite careful, as it is intended to burn continuously in the fireplace from Christmas until Epiphany.

According to this folk belief, the Christoxylo burns throughout this period and Christ keeps warm in the cold manger in Bethlehem. This appears to be closely related to the custom of burning wood in the fireplace so that the Kallikantzaroi, the mythical devils that live under the earth, cannot come up and enter the home.

Every housewife must have thoroughly cleaned the fireplace so that there are no remnants of old ashes. The chimney must be cleaned very carefully as well.

On Christmas Eve, when the whole family is gathered around the fireplace, the man of the house lights the fire and places the Christoxylo on the grate, with everyone wishing for it to keep burning throughout the twelve days of the holidays.

Unlike the Western tradition where people exchange gifts on Christmas Eve, people in Greece gift each other on New Year’s Eve.

In Greece, New Year’s Day is also the feast of Agios Vassileios, or St. Basil. The Santa Claus of Greece enters through the chimney on New Year’s Eve to place his presents under the Christmas tree.

Agios Vassilis brings children their presents and ushers in the New Year in good cheer with all the family gathered around the Christmas tree, exchanging presents and wishes.

On New Year’s morning, as the family goes to church, the man of the house puts a pomegranate in his pocket.

Upon his return home, he has to ring the doorbell, because according to custom he does not open the door with his own key, so that he will be the first to enter his house, right foot first, with the pomegranate in hand.

Entering — always with the right foot — he breaks the pomegranate, throwing it down with force so that it will break and the seeds to go everywhere. Meanwhile, he says:

“In good health, happiness and joy in the new year and as many seeds the pomegranate has, this many large bills to have in our pockets all year round.”

Then the children gather and look at the seeds, if they are crisp and crimson-colored. The stronger and more beautiful the seeds, the happier and more blessed will be the days that the new year brings.

In Greek Christmas tradition, New Year’s Day is inextricably linked to the feast of Agios Vassileios and vassilopita, which literally means the “cake of Vassileios.”

This cake-like sweet bread is often sprinkled with powder sugar or grated almonds and occasionally has raisins and nuts. Inside there is a randomly-placed coin for the lucky person when the Vassilopita is cut.

Vassileios was a humble Greek saint with a black beard and a dark, shabby coat. He is thought to come from Caesarea in Cappadocia in Asia Minor to bless Greek families and receive his share of the Vassilopita.

This custom calls for the Vassilopita to be cut by the head of the household in a ritual way. First he carves a cross on the surface and then cuts the pieces.

The first piece is for Christ, the second for Virgin Mary; then one for Agios Vassileios, one for the poor, one for the house, and after that the pieces go to the members of the family.

In older times, the rich put a golden coin inside. Nowadays it is a coin that is worth what the home owner decides, either a large present or a small one.

If the coin is found in one of the pieces for Christ, the Virgin Mary or Agios Vassileios, the present goes to the church of the parish.

According to one tradition, Vassilopita originated from Byzantine emperor Basil the Great, who in order to protect Caesarea in Cappadocia from a raid by barbarians, he made a fundraiser and collected gold coins and other valuables, to give to the enemy so they would not loot his land.

In the end, the enemy did not succeed in invading Caesarea and the valuables remained. Basil decided to return the valuables to his people.

Since he did not know who had given what, in order to be fair Basil had all bakers in the area make small buns of bread, and stuff in each one of them a gold coin or a small valuable.

The buns were distributed to everyone and everyone kept what was inside, whether it was big or small in value.

It is said that children were the recipients of most of the high-value gifts inside the buns, thus creating the myth of Agios Vassileios (Santa Claus), the gift-bearer for children.