ATHENS, Aug 5 (Reuters) – Wildfires north of Athens leapt back to life on Thursday as searing conditions persisted and emergency crews battled blazes across Greece for a third day running.

Red flames and sparks glowed in the night on the outskirts of the Greek capital, residents fled suburbs, asylum seekers were evacuated and authorities warned of more blazes on Friday as temperatures hovered around 40 degrees Celsius (107 Fahrenheit) and gale force winds were expected.

Twelve people were taken to hospital including two volunteer firefighters who were treated for burns in intensive care, health officials said.

“We are dealing with unprecedented conditions as many days of heatwave have turned the whole country into a powder keg,” he said in a special televised address.

With swathes of neighbouring Turkey also aflame, the smoke-filled skies have added to apocalyptic images of floods and fire seen across Europe this summer.

On the island of Evia, close to Athens, church bells rang on Thursday to warn of the fires. Some 25 villages on the island have already been evacuated with the beach resort of Agia Anna threatened late on Thursday.

“The situation is out of control. The flames are more than 40 metres high,” the local mayor George Tsapourniotis told Alpha television as coast guard vessels headed to the area to help with the evacuation.

Mitsotakis said defences against the reality of climate change had to be strengthened. He said there would be time for “criticism and self-criticism” of the government’s handling of the crisis but for the moment urged citizens to remain united.

Earlier, he visited an area in the western Peloponnese near the site of the ancient Olympic Games where emergency services fought all night to save one of Greece’s best known archaeological sites. 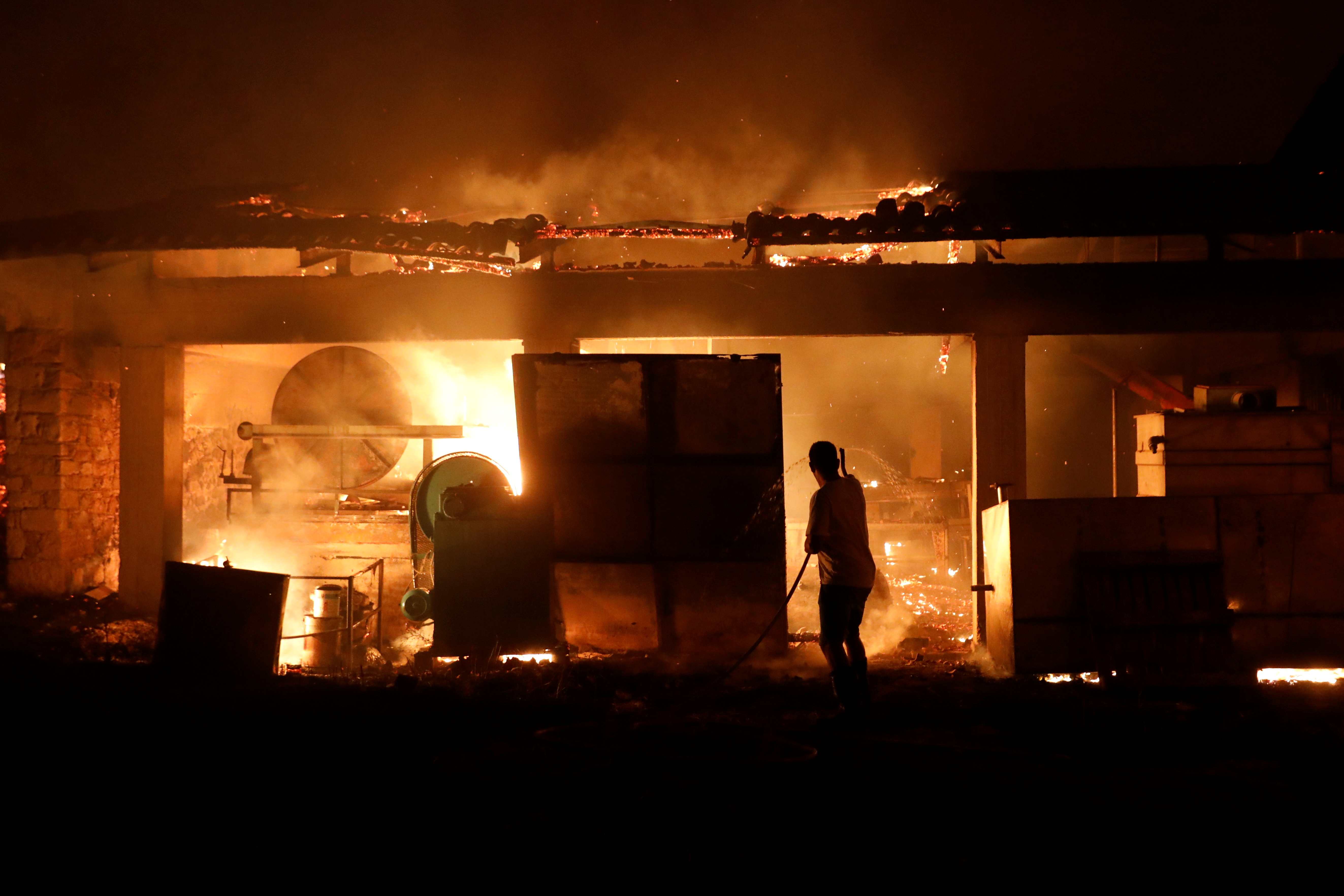 A man sprays water on a burning olive press factory during a wildfire in the village of Rovies, on Evia island, Greece, August 4, 2021. REUTERS/Costas Baltas

A man sprays water on a burning olive press factory during a wildfire in the village of Rovies, on Evia island, Greece, August 4, 2021. REUTERS/Costas Baltas 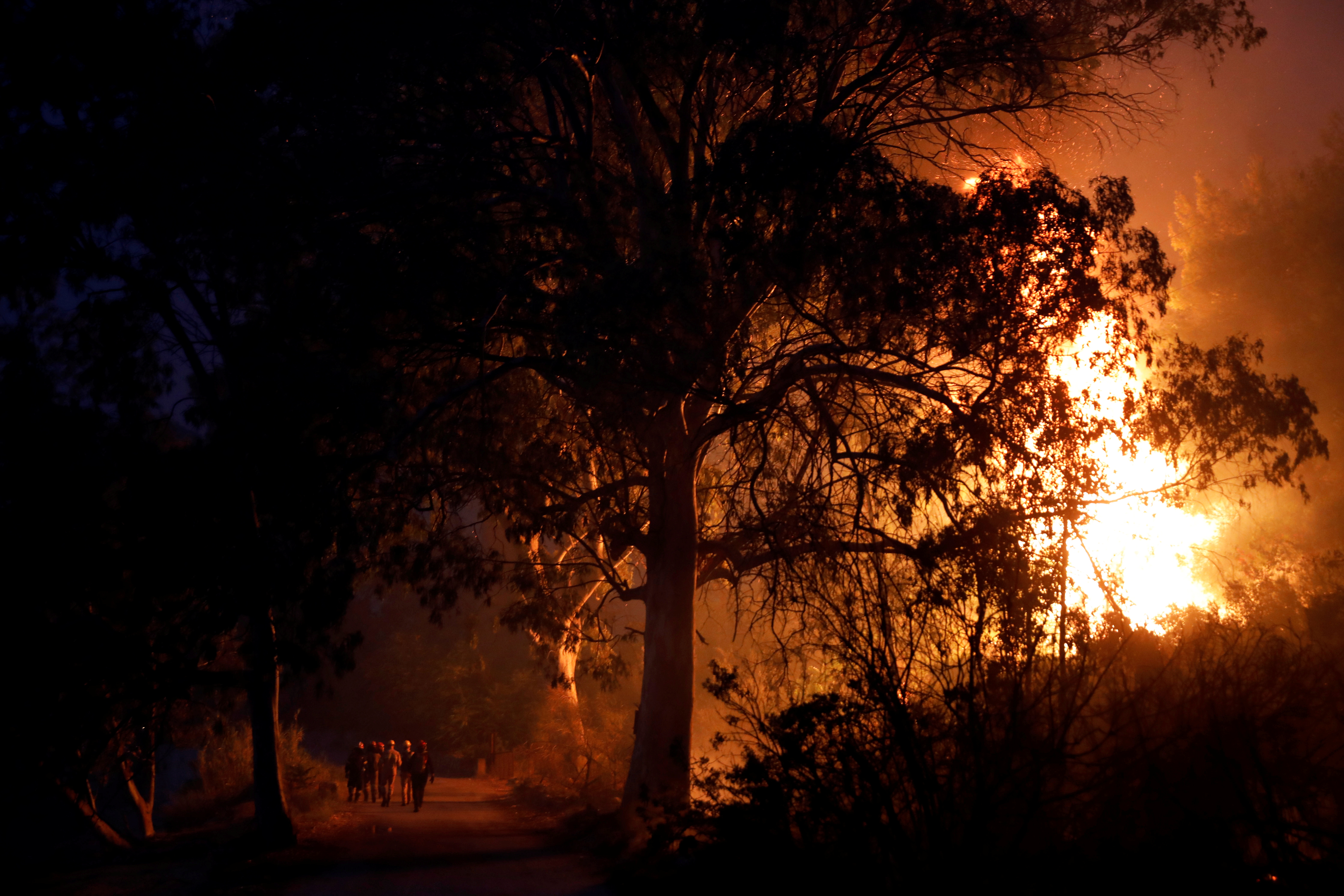 Firefighters walk as flames rise during a wildfire in the village of Rovies, on Evia island, Greece, August 4, 2021. REUTERS/Costas Baltas 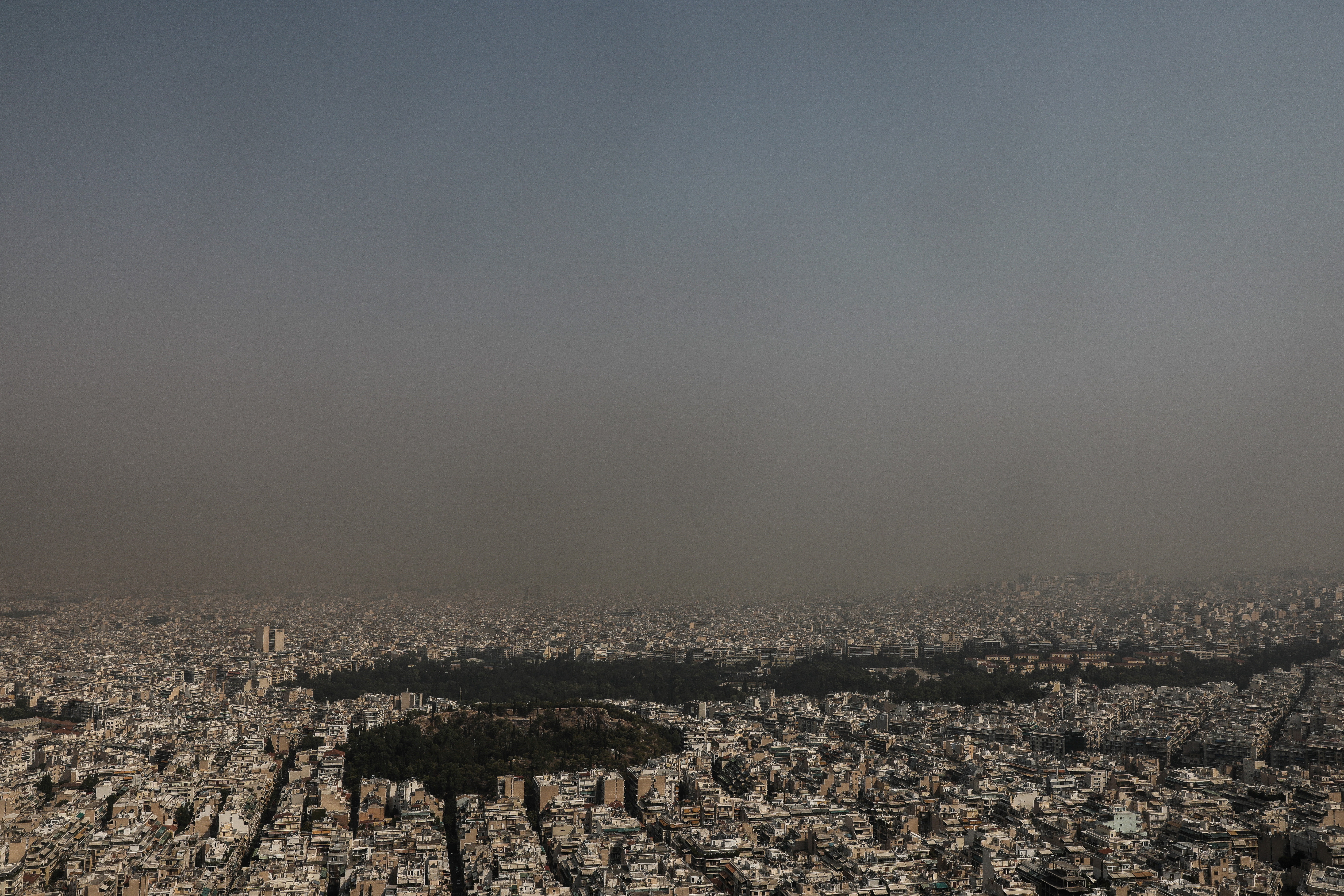 Athens covered in smoke from a wildfire burning at Varympompi suburb in suburb north of Athens, Greece, August 4, 2021. Giannis Panagopoulos/Eurokinissi via REUTERS

Firefighters, backed by waterbombing fixed-wing aircraft and helicopters, had managed to control some of the blazes near Athens earlier in the day.

But the heat fanned them back into life, with flames crossing the motorway connecting Athens to northern Greece and threatening more built-up areas.

Late on Thursday afternoon, authorities ordered the evacuation of a clutch of suburbs to the north of Athens and moved a group of asylum seekers from the nearby Malakasa migrant reception centre.

Tens of dozens of wildfires have broken out across Greece since Tuesday, destroying houses, forcing the evacuation of dozens of towns and villages and burning thousands of acres of forest land.

The Civil Protection Authority issued an “extreme fire warning” for half the country on Friday amid the heatwave.

The finance ministry announced emergency payments of up to 6,000 euros ($7,100) for people who had lost possessions and said more measures would follow.

Local utilities said there could be rolling power cuts in some parts of the Attica region around the capital due to the fire.

Access to parks and forests will be forbidden in the coming days, Deputy Citizens’ Protection Minister Nikos Hardalias said. Additional firefighters and aircraft were expected to arrive from France, Sweden, Romania and Switzerland.