The stern of a huge container ship that has been wedged across the Suez Canal for almost a week has been freed from the shoreline, officials say. According to the Suez Canal Authority, the course of the 400m-long (1,300ft) Ever Given has been corrected by 80%. Further efforts to move the boat would resume later on Monday. But the head of a company involved in the rescue efforts urged caution, warning that completing the operation would not be “a piece of cake”.

The Ever Given has been blocking one of the world’s busiest trade routes, forcing companies to reroute ships and causing long tailbacks of hundreds of vessels.

According to a BBC article, the reports that the ship had been partially freed raised hopes that traffic along the canal could resume within hours, clearing the way for an estimated $9.6bn (£7bn) of goods being held up each day.

Salvage operation
Peter Berdowski, CEO of Boskalis, whose sister company SMIT salvage is working to free the ship, said the vessel had been rotated about 20 degrees. “That is actually the easiest part,” he told Dutch radio on Monday morning. Moving the bow away from the canal bank, where it remains stuck in sandy clay, will be more difficult, he added.

CNN reports that the operation to free the rest of the ship will resume when the water level rises in the late morning, authorities said in a statement. If the tugboats are unable to wrest the ship free, Berdowski said that they would try to direct water underneath the bow using dredging equipment. 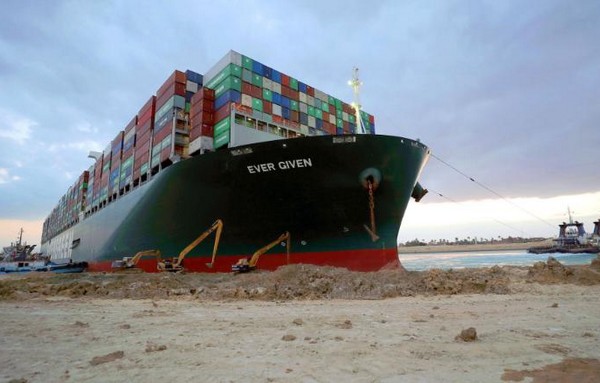 Rescue workers from the authority and the Dutch company Smit Salvage used tug boats to wrench the rear of the ship from the canal bank. / Image: CNN

“The container ship began to float successfully after responding to the pulling maneuvers,” said Osama Rabie, head of the Suez Canal Authority (SCA), in an interview. “Once the ship is withdrawn, we will resume navigation directly, and we will take it to the Bitter Lakes.”

Cost of the Suez Canal blockage
The Suez Canal Authority has stated that further efforts to move the boat would resume later on Monday, and there are now hopes that traffic will be able to resume along the canal within hours.

The situation has been the source of much worry and frustration for the global shipping industry. Richard Mead, managing editor of shipping journal Lloyd’s List, told the BBC’s Today Programme: “It’s clear the Suez Canal is going to start reopening to traffic later today, once they’ve done a full inspection.”

He added that some smaller ships have already started transiting past the vessel. “We’re looking at about 450 ships still waiting to transit the canal. It’s going to be a lengthy process clearing that backlog,” he said.

About 12% of global trade, around one million barrels of oil and roughly 8% of liquefied natural gas pass through the canal each day. SCA chairman Osama Rabie on Saturday that the Canal’s revenues were taking a $14m-$15m (£10.2m-£10.9m) hit for each day of the blockage. This is despite the fact that the canal opened an older channel to try to get more ships through.

Prior to the pandemic, trade passing through the Suez Canal contributed to 2% of Egypt’s GDP, according to Moody’s.

Insurers may be on hook for millions
There were potentially thousands of insurance policies taken out on the steel boxes stacked high on the massive boat blocking the Suez Canal and upending world trade. They could result in millions of dollars in payouts.

Livemint.com reports that Taiwan’s Evergreen Line, which chartered the Ever Given, says Japan’s Shoei Kisen Kaisha Ltd — the ship’s owner — is responsible for any losses. The ship owner has taken some responsibility but says charterers need to deal with the cargo owners. The Suez Canal’s own policies suggest it’s not to blame, even if its pilots were at the helm of a ship that ran aground.