by PAUL ANTONOPOULOS
The Republic of Artsakh has been recognised by a second Australian state thanks to the efforts of Greek-Australian Tom Koutsantonis.

Koutsantonis, who represents West Torrens as a Member of the South Australian Parliament, called out the “policy of Pan-Turkish nationalism” endorsed by Turkish President Recep Tayyip Erdoğan and his Azeri counterpart Ilham Aliyev.

Because of the motion pushed forward by Koutsantonis and his Labor Party colleague Jayne Stinson, South Australia became the second state in Australia to recognise the Republic of Artsakh.

In a powerful speech given to the South Australian Parliament, Koutsantonis said “Armenians, Mr. Speaker, deserve the right to self-determination. Sir, they have earned it.”

“They earned it through the blood and sacrifice of 1.5 million innocents, who were systematically murdered for one sole reason: they were Armenian,” he continued.

“Greece this year will celebrate its 200th year of independence. Independence from the same oppression, the same murderers, the same tyrants that occupied the lands of my mother and father – the Ottoman Empire,” the MP said.

Koutsantonis then made reference to the overall Turkish genocide against the Ottoman Empire’s Christian minority that led to the slaughter of 3 million people.

“Our two nations, along with the Assyrians, spilled blood because of our shared faith, our unique ethnicities, and because we stood in the face of tyranny, authoritarianism, expansionism and empire,” he said.

The MP revealed that he was given an Armenian flag before the parliamentary session.

The Permanent Representative of the Republic of Artsakh in Australia, Kaylar Michaelian, said South Australia’s recognition has restored the Armenian people’s faith in humanity.

“On behalf of the indigenous Armenian people of the Republic of Artsakh, our office welcomes with deep gratitude the motion passed by the South Australian House of Assembly condemning the illegal and unprovoked military aggression by Azerbaijan, Turkey and their hired Jihadist mercenaries. We are encouraged by the support of the Parliament for the right to self-determination of our people in Artsakh,” Michaelian said.

“We continue to have our faith restored in humanity, when the good people of South Australia chose to stand for democratic values and human rights wherever in the world these may be under threat,” the representative continued.

“A clear signal has been sent from Adelaide to Baku and Ankara that, despite their best efforts at obfuscation and misinformation, righteous Australians will stand shoulder to shoulder with the peace-loving Armenians in Armenia and Artsakh,” he added. 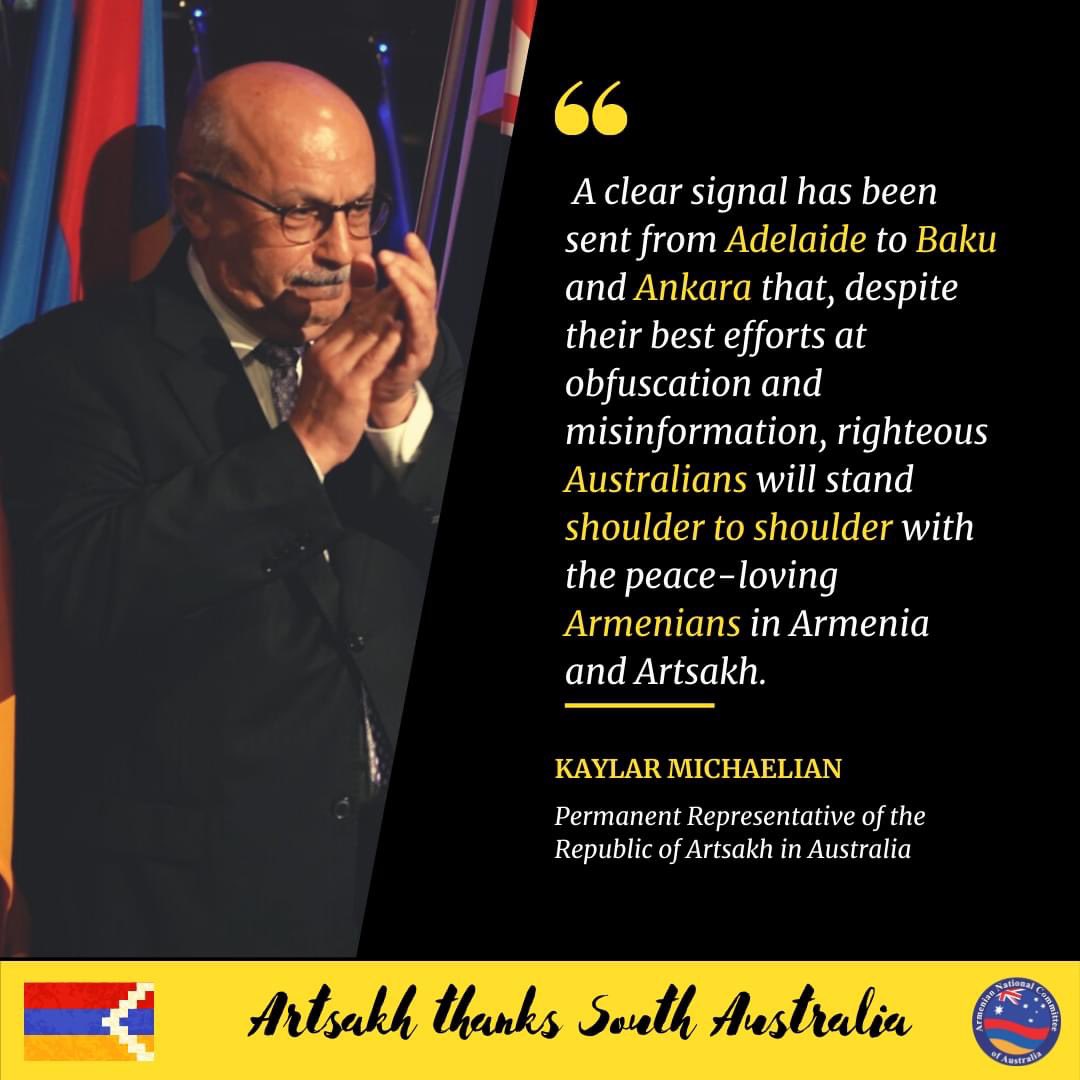 The Motion in full reads as follows:

(2) Notes the serious concerns that have been raised from Armenian-Australians regarding the existential threat to the indigenous Armenian population of the Republic of Artsakh by this military action, and in any attempts by Azerbaijan to prevent the peaceful resettlement of the indigenous Armenian population following agreement to a provisional ceasefire on 9 November 2020.

(3) Notes the serious concerns raised by Armenian-Australians and independent international organisations regarding the risk of Azerbaijan destroying sites of global cultural and historical significance.

(4) Condemns the actions of President Erdogan of Turkey and President Aliyev of Azerbaijan in their pursuit of a policy of Pan-Turkish nationalism, which has previously led to genocide and which now threatens the Armenian population of Artsakh with ethnic cleansing.

(5) Calls on the Federal Government to condemn these attacks and advocate its support for the safety and security of the Republic of Armenia and Artsakh. ΚΙLL ΒΙLL: Bill Gates Tells Humanity To Get Ready, ‘Another Pandemic Is Coming’