Former IT head of Leonardo SpA “undertook the operation to switch data from the US elections of 3 November 2020 from significant margin of victory for Donald Trump to Joe Biden in a number of states where Joe Biden was losing the vote totals.”

The legal counsel of Italy’s Supreme Court testified on video that an individual within the country’s defense contractor Leonardo SpA executed an illegal cyber operation to switch 2020 election votes from President Donald Trump to Joe Biden.

Professor Alfio D’Urso recited his written sworn affidavit from January 6th so as to verify its contents now that the document has been beginning to circulate within American alternative media.

“I, Alfio D’Urso, lawyer of Via Vittorio Emanuele, Catania, do hereby provide the following affidavit of facts as conveyed in several meetings with the high-level army security services official,” D’Urso began.

“Arturo D’Elia, former head of the IT Department of Leonardo SpA, has been charged by the public prosecutor of Naples for technology/data manipulation and implantation of viruses in the main computers of Leonardo SpA in December 2020.”

“D’Elia has been deposed by the presiding judge in Naples and in sworn testimony states on 4 November 2020, under instruction and direction of US persons working from the US Embassy in Rome, undertook the operation to switch data from the US elections of 3 November 2020 from significant margin of victory for Donald Trump to Joe Biden in a number of states where Joe Biden was losing the vote totals.”

“Defendant stated he was working in the Pescara facility of Leonardo SpA and utilized military grade cyber warfare encryption capabilities to transmit switched votes via military satellite of Fucino Tower to Frankfurt Germany.”

“The defendant swears that the data in some cases may have been switched to represent more than total voters registered. The defendant has stated he is willing to testify to all individuals and entities involved in the switching of votes from Donald Trump to Joe Biden when he shall be in total protection for himself and his family. Defendant states he has secured in an undisclosed location the backup of the original data and data switched upon instruction to provide evidence at court in this matter.”

“I hereby declare and swear the above stated facts have been stated in my presence.”

President Trump was reportedly briefed on this illegal operation out of Italy, according to Nations in Actions founder Maria Zack. 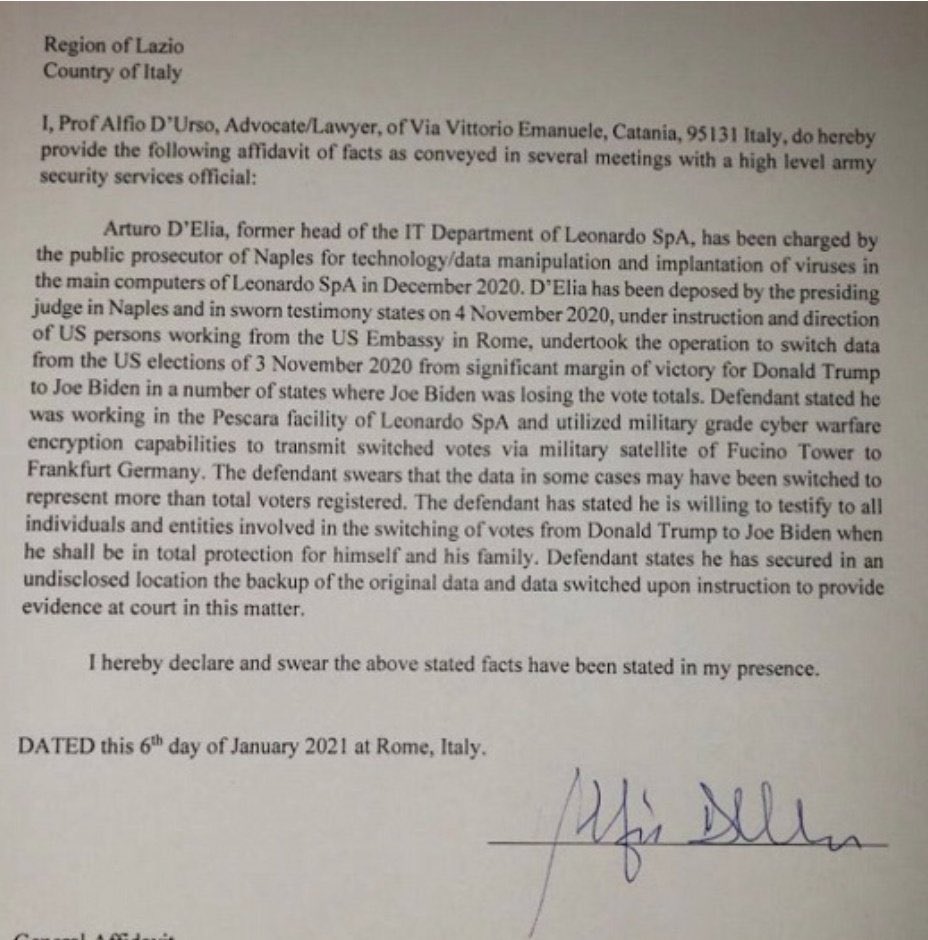