An analysis of the raw voting data dumps from the 2020 election, carried out by user “Centipede” (“PedeInspector”) at TheDonald.win, reveals bombshell news.

It appears that hundreds of thousands of votes were switched from Trump to Biden via the software control systems of the voting machines. This was done in real time, during election night, which also explains why election counting was slowed in swing states in order to allow the election theft to be coordinated and executed.

PedeInspector explains how he wrote a script to detail all the instances of votes being lost or switched from Trump to Biden. His data source is the NYT raw data dump feed at the following link (which may not function once the NYT pulls it):

As The Gateway Pundit explains:

The author also claims that the data is from Edison Research and it is the same data that is used for election coverage by at least ABC News, CBS News, CNN and NBC News. It is also used for the website of the NYT, and probably others as well.

This json data feed is like a transaction log file. It shows each update to the voting totals, like a Flight Data Recorder (“Black Box”) on a commercial airliner.

He shows what one of the data switches looks like: 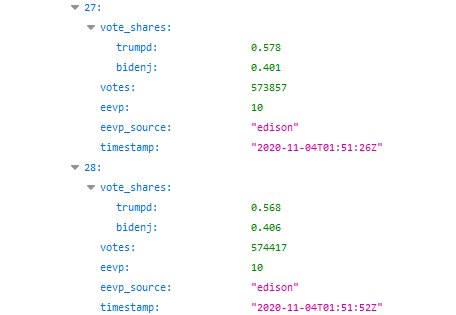 As you can see, votes were taken from Trump and added to Biden. In this case it was only a few thousand, but there were thousands of other vote switch transactions in the log files.

Understand that this is absolute proof of software-based vote theft. (See more details below.)

This is like having the black box recorder recovered after a jet crash. All the data are intact. The election was stolen over the ‘net, in real time.

This list is organized by voting systems (voting software brands). We are highlighting the swing states in particular, so notice how the special emphasis on vote theft focused on these states.

In yet more shocking news that will change the course of history, Rudy Giuliani has now confirmed, during a live broadcast with Steve Bannon’s “Warroom” program, that Dominion software witnesses are stepping forward and blowing the whistle on the massive vote theft fraud.

Without the vote fraud, Trump wins with 307 electoral votes

The website EveryLegalVote.com shows the real election results once you remove all the vote theft.

Fraud has been detected and documented in nearly all the swing states, including PA, MI, WI, GA and VA: 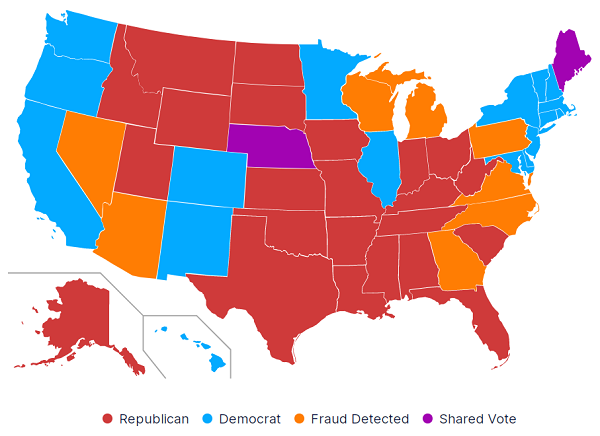 Yesterday, sources told us that the CIA was in charge of running the vote theft operation, with Gina Haspel deeply involved in straight up treason. On election night, President Trump and hand-selected DoD personnel were sitting in secure command room, watching and documenting the entire election theft taking place in real time.

All the vote theft was recorded in detail, and this vote theft was allowed to take place so that deep state treasonous actors could be caught in the act.

Big Tech, the mainstream media and the CIA are all conspiring to try to gaslight the nation and falsely claim that Biden won, even as they all know the election was stolen via voting machine software theft. This is why they are rushing to remove Trump from office right now, with John Brennan, Obama’s former CIA director, practically crapping himself on live TV and demanding Trump be immediately removed via the 25th Amendment.

That’s because Brennan and the other deep state actors know they’ve been caught. Trump has all the evidence. In fact, he has a detailed transaction log showing the fraud playing out in real time.

In the coming weeks, this information will be presented to the U.S. Supreme Court. We anticipate SCOTUS will invalidate the presidential election and kick the outcome back to Congress, where each state gets one vote to choose the next President. Republicans have a strong majority in the number of state legislatures they control, and they will easily win that vote. (Nancy Pelosi may refuse to allow the vote to take place, but if she does, she will be arrested for treason.)

Trump has fired former Defense Secretary Mark Esper and is cleaning house at the DoD in order to get the Pentagon ready for military arrests of the traitors who carried out this engineered election theft.

Hundreds (or thousands) of people will eventually be arrested and charged with various crimes, including conspiracy and sedition. Many of the deep state players who worked under Obama will go to prison once this is all said and done.

The insane, radical Left-wing lunatics in America will explode with rage and violence once the election is announced for Trump, and this will almost certainly lead to President Trump invoking the Insurrection Act and deploying troops on the streets to take down left-wing terrorists. At this time, America will be plunged into significant chaos and violence, which is sadly unavoidable as part of the process of draining the swamp and putting down left-wing terrorists.

All American patriots are advised to double check their rifles, ammo and red dot sights. This situation is absolutely going kinetic, most likely within the next 70 days. But the good news is that Trump holds all the cards and has all the evidence of vote theft that he needs to win.

Listen to my emergency podcast from Nov. 11th for a full explanation of what happens next: SCOTUS, Congress, Nancy Pelosi, military police and more. This is my current best estimate of where this goes and how Trump wins the election and defeats the deep state: