If you don’t think that politicians in the United States are not puppets and lackeys of the Khazarian Bansker Cult, then you are not living on planet earth. And if you think that those politicians will represent you or the average American, then you are living in Alice in Wonderland.

Take again Sheldon Adelson. We have written in the past that Adelson is part of the criminal underworld. He was accused of spreading prostitution in places like China, and he is actually the man behind Donald Trump. Once again, if you don’t think that is true, then let’s ask Trump himself:

“I said to Sheldon, “What do you think was bigger? … Israel and the embassy going in, and it became Jerusalem, the capital of Israel? Or the Golan Heights [recognition as Israeli territory]?” He said, “Neither.” I said, “What do you mean ‘neither,’ Sheldon?” He said, “The biggest thing you did for Israel was breaking up and terminating the horrible, one-sided, catastrophic deal that was made by President Obama.” (Applause.) Right?

Keep in mind that it was Sheldon Adelson who unflinchingly declared back in 2013 that he wanted the United States to drop an atomic bomb on Iran.[1]

Trump knows for certain that he is a puppet of Sheldon Adelson. How? Well, back in 2015, Trump unequivocally declared: “Sheldon Adelson is looking to give big dollars to [Marco] Rubio because he feels he can mold him into his perfect little puppet.” Who’s a little puppet now? Who is prostrating before both Adelson and the Jewish lobby? Trump. He declared unapologetically:

Trump again said that he learned some of his tricks from none other than Sheldon Adelson, whom he refers to as king:

Now how much money Adelson has recently poured into the Trump campaign? $75 million. But that’s not all. According to Politico:

“The money for Preserve America brought the Adelsons’ giving to Republican candidates and committees to a whopping $176 million for the 2020 election cycle, according to FEC data. The couple had previously given $50 million to Senate Leadership Fund, the GOP super PAC focused on defending the Senate majority. An additional $40 million in donations to the Congressional Leadership Fund, the Republican super PAC focused on the House, was revealed in new filings late Thursday night.”[2]

Why all this? Well, Connie Bruck of the New Yorker said back in 2008 that Adelson is on a “relentless quest for global influence.”[3] Adelson, Bruck continued to say, has made China, by 2006,

“the top gambling center in the world, with gaming revenues exceeding $6.9 billion, a quarter of a billion dollars more than those on the Las Vegas Strip. In 2007, revenues climbed to $10.3 billion. That year, Adelson opened the $2.4-billion Venetian Macao—with canals and stripe-shirted gondoliers, as well as an extensive shopping mall and a five-hundred-and-forty-six-thousand-square-foot casino, which is the largest in the world.

“Since the Sands Macao opened, his personal wealth has multiplied more than fourteen times, and, according to the Times, in the two years after his company went public he earned roughly a million dollars an hour.”[4]

Adelson, “who had been a generous donor to AIPAC since the nineties,”[5] said: “In my sixty-three years in business, in over fifty different businesses, I’ve broken the mold and changed the status quo.”[6]

Adelson was called “a Bush Pioneer” because he donated millions of dollars to George W. Bush’s campaign. In return, Bush made every effort to protect and defend the Israeli regime against any criticism. When political prostitute Condoleezza Rice was a little concerned that Israel’s policy could backfire, Adelson went mad.

“Then, as Adelson later told an acquaintance, Bush put one arm around his shoulder and another around that of his wife, Miriam, who was born in Israel, and said to her, ‘You tell your Prime Minister that I need to know what’s right for your people—because at the end of the day it’s going to be my policy, not Condi’s.’”[7]

Bush turned out to be right—his policy, not Condi’s, prevailed. Later, the Zionist of America, “to which Adelson is a major contributor,” put out a headline which specifically said: “SECRETARY RICE: DON’T PROMOTE A STATE FOR PALESTINIANS WHILE THEIR 10 COMMANDMENTS PROMOTE TERRORISM AND ISRAEL’S DESTRUCTION.”[8]

Over the years, Adelson has done everything he could to destabilize any peaceful resolution between Israel and the Palestinians. Trump has obviously followed in his footsteps. This is one reason why the Trump administration has been concocted complete hoaxes and fabrications about Iran.

In short, decent Americans should look for a politician who can provide a solid foreign policy—a policy that will break the unconditional relationship with Israel. Until a politician can do that, then Americans will continue to be duped by politicians who promise paradise on earth but always deliver poison. 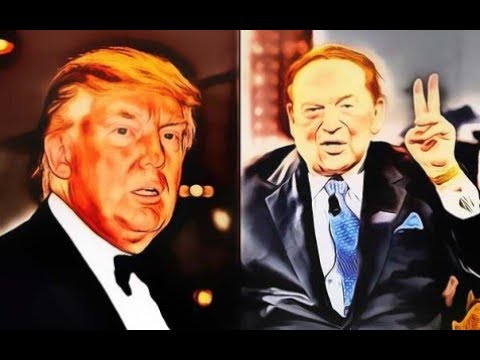 BIOGRAPHY
Jonas E. Alexis
Jonas E. Alexis has degrees in mathematics and philosophy. He studied education at the graduate level. His main interests include U.S. foreign policy, history of Israel/Palestine conflict, and the history of ideas. He is the author of the new book Zionism vs. the West: How Talmudic Ideology is Undermining Western Culture. He is currently working on a book tentatively titled, Kevin MacDonald’s Abject Failure: A Philosophical and Moral Critique of Evolutionary Psychology, Sociobiology, and White Identity. He teaches mathematics in South Korea.
[email protected]
https://www.veteranstoday.com/2020/10/23/khazarian-gangster-sheldon-adelson-gave-75-million-to-trump-again/
ShareTweetPin ItShare California County Sheriff: “I Will Not Enforce Vaccine Mandate” The…DECEPTION CONTINUES – Washington, DC officer who responded to Capitol riot is third to die by “suicide” GOP Grifters: Texans Billed up to $17,000 a month for Electricity or Die “Public Health Orders Are NOT Laws” – California School District DEFIES Newsom, Announces They Will Simply Not Enforce Vaccine Mandate on Students or Staff