Alexander Lukashenko has ruled Belarus for a quarter of a century. Photograph: Vasily Fedosenko/Reuters

GreekNewsOnDemand.com comments: What the following GUARDIAN article fails to note is that Lukashenko has publicly exposed both the WHO and the IMF for trying to…BRIBE HIM WITH MILLIONS of DOLLARS to do an Italian-type lockdown in his country for the FAKE “coronavirus pandemic” and how he has REFUSED to do so!!! And now….ALL OF THE SUDDEN… he’s being attacked on all sides!!!

The authoritarian president of Belarus, Alexander Lukashenko, has accused his opponents of trying to organise a massacre in the centre of Minsk, as he seeks to shore up support ahead of the country’s most unpredictable elections in a generation.

In a speech lasting an hour and a half, Lukashenko appealed to supporters’ desire for stability and played up fears of a “colour revolution” backed by Moscow and hostile powers in the west.

Without directly naming Russia, he repeated accusations that Moscow had sent mercenaries to destabilise the country, claiming that a new group of saboteurs had gathered in the south.

“They’ve decided to try out new forms of colour revolution against us,” he said, a term that normally refers to earlier uprisings in Georgia, Ukraine and Kyrgyzstan. “It won’t work.”

Referring to the 33 Russian mercenaries detained at a sanatorium last week and accused of planning a terrorist attack, he said: “It’s a very dangerous and strong signal … these people were sent specially to Belarus and given the command to wait.

“So far there is no open warfare, no shooting … but an attempt to organise a massacre in the centre of Minsk is already obvious.”

Lukashenko, who has held power for a quarter of a century through a combination of populism and repression, is facing one of the toughest challenges of his career as he seeks a sixth term in office.

The opposition has united behind Svetlana Tikhanovskaya, a reluctant stand-in for her husband, a popular YouTuber. Her campaign has gathered momentum in recent days and has held the largest political rallies in Belarus since the Soviet Union.

Lukashenko also used his speech to call on Belarusians to avoid protests in the coming days. Accusations of voter fraud and public demonstrations are virtually guaranteed after Sunday’s vote.

Those who want another president “should not go to the public square, but go to the polling station and vote,” he said. Those attending illegal meetings would meet an “instant reaction and the most severe resistance”, he warned.

Tikhanovskaya has called for free and fair elections, the release of political prisoners, and the repeal of the 1994 constitution, which eliminated term limits for the presidency.

“Do you want to to return to the 1990s?” Lukashenko said, referring to a period of time often associated with criminality. “I don’t want that. It won’t happen as long as I’m alive, and not only while I’m president.”

Opposition to Lukashenko has grown for a number of reasons. People are exhausted with his regime, the economy is struggling and his response to the coronavirus epidemic, which he has described as a “psychosis”, has been lacklustre.

The president, however, defended his record on combatting the virus in his speech. It “seriously tested the strength of our society”, he said. “The main conclusion is that we passed this exam and managed with this misfortune. Anyone who is not blind can see it.”

Lukashenko admitted last week that he had fallen ill with the virus. 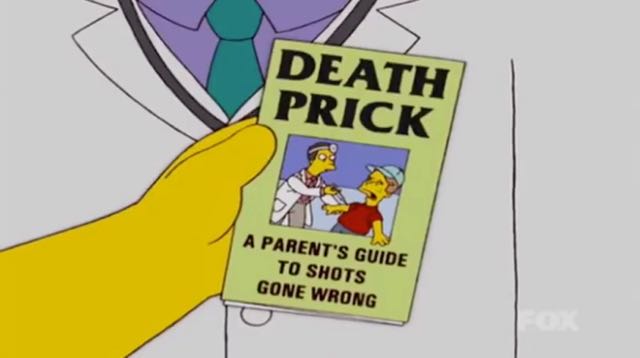 Simpsons Predicts Covid Jab – Mr. Garrison Finally Learns the Truth About the Plan to Vaccinate and Kill Humanity by the Elites – So You Think You Are Safe Since You Didn’t Get the Jab!