SEATTLE — On June 8, Seattle police frantically loaded what they could from the east precinct onto trucks and cars. Within hours, they boarded up and abandoned the station. That night, left-wing protesters from Black Lives Matter and Antifa declared ownership of the six-block neighborhood in the middle of the Pacific Northwest’s largest city. They named their new territory the “Capitol Hill Autonomous Zone,” or CHAZ. No laws or rules applied here except for one: “No cops allowed.”

During five undercover days and nights in the zone, I witnessed a continuing experiment in anarchy, chaos and brute-force criminality. In order to avoid being exposed as a journalist — several reporters have been barred or expelled — I slept and showered outside the zone. (Those inside have no showers but they do have portable bathrooms.) I took meals, and most of my water breaks, elsewhere because I was reluctant to remove my mask and risk being recognized. Every day I entered the zone twice through its semi-porous borders — once in the early afternoon, and again after sundown, staying until the wee hours.

Crime has surged inside and outside the zone.

On Saturday morning, a shooting erupted that left at least one person dead and another injured near a border checkpoint. Police were reportedly met with resistance when they tried to get to the victims, who apparently were then taken in private cars to the hospital. Cops made it into the zone to gather shell casings and evidence, some reports said, as police in riot gear stood at the border.

On Thursday, police arrested Robert James after he left the CHAZ. He is accused of sexually assaulting a deaf woman who was lured inside a tent. The same day, former city council candidate Isaiah Willoughby was arrested on suspicion of starting the arson attack on the East Precinct June 12.

Police Chief Carmen Best has stated that police response times to 911 calls in the surrounding area have “more than tripled” because they are down a station.

Various “Occupy”-type protests have occurred across the US since the original occupation near Wall Street in 2011. But CHAZ is nothing like the mostly peaceful tent city in privately-owned Zuccotti Park that was corralled and closely monitored by the NYPD.

CHAZ occupants, ranging from several hundred to 10,000 depending on the day, with many openly armed, control all of the Capitol Hill neighborhood near downtown. The neighborhood is the heart of Seattle’s gay and counter-culture district, and is densely filled with businesses and apartment buildings. CHAZ now claims all of it.

Before the takeover, violent clashes between rioters and police defending the east precinct resulted in dozens of officers injured by rocks and other projectiles. Protesters and rioters complained of police brutality, leading Seattle Mayor Jenny Durkan and Chief Best to ban cops from using tear gas, pepper spray and flash-bangs for 30 days.

CHAZ is having reverberating effects elsewhere. In the early hours of Thursday morning, Antifa and other left-wing protesters established an “autonomous zone” in downtown Portland, Ore. They stole city and business property to build a wall. At least one protester was seen carrying a rifle. The area was later cleared by police but far-left activists are determined to try again. Protesters in Nashville and other cities have attempted to recreate their own “autonomous zones” modeled after CHAZ but have so far been stopped by law enforcement.

In Seattle, as soon as police evacuated from the station nearly two weeks ago, masked protesters stole city property — barricades, fencing and more — to create makeshift barriers. These barriers became the official border checkpoints in and out of CHAZ. They were later fortified with additional layers of security: more blockades and 24-hour guards. A large team of volunteers assembled to designate themselves “security” for CHAZ. Many of them wear patches signaling they’re part of the Puget Sound John Brown Gun Club, a far-left militia-type organization named after the radical abolitionist. Last year, one of the group’s members carried out an armed attack on an Immigration, Customs and Enforcement facility in Tacoma, Wash. Police said that Willem van Spronsen tried to ignite the 500-gallon propane tank attached to the facility. He was killed by police. 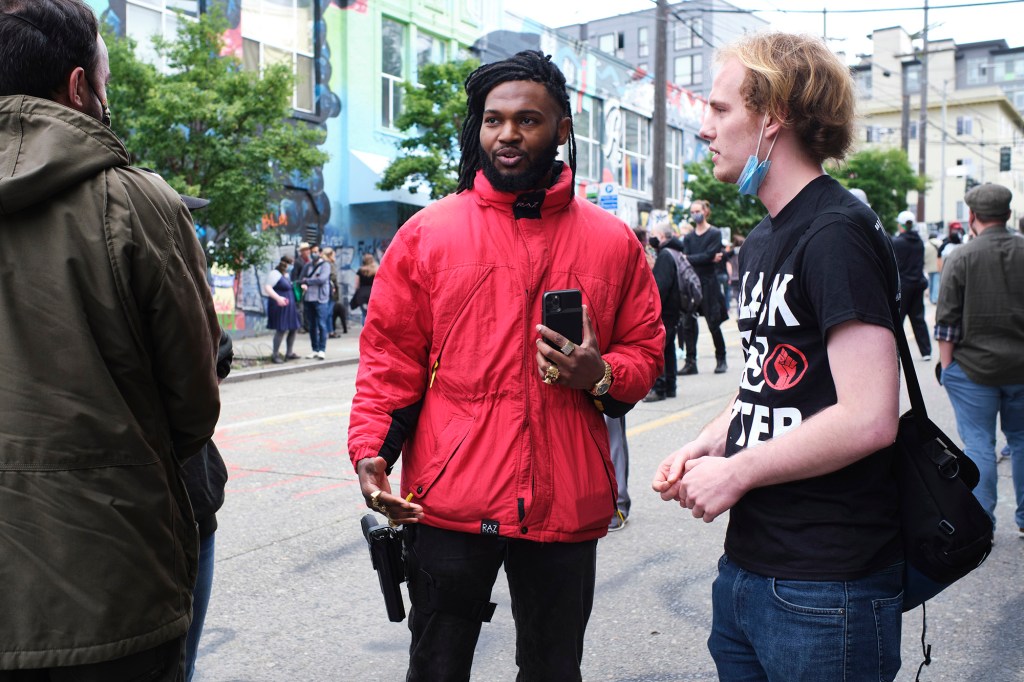 Despite the group’s link to violent extremism, its armed members were celebrated in the CHAZ for “protecting” the new denizens. The head of CHAZ’s security is a short female named “Creature.” She and the rest of her team communicate with walkie-talkie devices and earpieces. Some of them openly carry rifles, handguns, batons or knives. Their operating base is in the open-air eating section of the Ranchos Tacos Mexican restaurant. Signs posted all over their base declares: “NO PHOTOS. NO VIDEOS.” Another sign lists Venmo names for donations.

Though CHAZ claims to have no rules, it quickly developed a complex code of conduct that varied from zone to zone and even the time of the day. For example, those in the garden area, who are mostly white, need to make sure they do not “recolonize” the space.

Mainstream media reports have focused on the “block party” atmosphere of the occupation, repeating a talking point from the Seattle mayor. She, along with fellow Democrat, Gov. Jay Inslee, have gone to great lengths to emphasize the “peaceful” nature of the occupation. For media crews that arrive during the day, that is certainly what they will see. People have barbecues in the street. Many bring their children to make street art. People walk their dogs.

But at night, a whole different side of CHAZ emerges.

Lacking agreed-upon leadership, those who have naturally risen to the top have done so with force or intimidation. For example, rapper Raz Simone, real name Solomon Simone, patrols CHAZ on some nights with an armed entourage. Simone, originally from Georgia, has an arrest record for child cruelty and other charges. He usually conducts his patrols carrying a long semi-auto rifle and sidearm. Last weekend, a live stream recorded Simone handing another man a rifle from the trunk of a car.

Not everyone in CHAZ recognizes Simone’s police-like presence, but no one is willing to stand up to him and his group. There have been consequences to those perceived as challengers or threats. Independent Los Angeles-based journalist Kalen D’Ameida recorded Simone and his crew in the early hours of Monday morning. He was spotted by one of Simone’s men, who manhandled him and demanded he turn over his mobile device. Simone’s team chased D’Ameida and tried to drag him to the security tent. He escaped by hiding in a construction site outside CHAZ until police responded to his 911 call.

Those unfortunate enough to have homes or businesses within CHAZ — an estimated 30,000 residents — have no say over their new overlords. Residents have discreetly voiced their concerns to local media. Gunshots and “screams of terror” at night have been reported. A resident of an apartment building came out twice to ask protesters to leave the alley where the entrance is. They brushed him off.

Every business and property inside CHAZ has been vandalized with graffiti. Most messages say some variation of “Black Lives Matter” or “George Floyd,” but other messages call for the murder of police. Most businesses are boarded up. “ACAB” — all cops are bastards, an Antifa slogan — is written over them.

Businesses outside CHAZ are also suffering. Last week, the Trader Joe’s in Capitol Hill announced it was closing immediately and indefinitely because of “safety and security concerns.” Then last Sunday night, around 100 angry protesters sprinted toward a nearby auto repair shop to “rescue” a comrade who had been detained. All it took to sic the mob on the business was one man yelling into a microphone inside CHAZ. According to the police report, the store’s owner, John McDermott, stopped Richard Hanks after he allegedly broke into the business, stole property and tried to start a fire. The owner and his son said they called police “multiple times” but cops and firefighters never responded.

Rioters from CHAZ broke down the gate to the business lot and began rushing the owner. A large team of CHAZ volunteers successfully de-escalated the situation by forming a human chain where the fence once stood. It was one of the rare occasions the community was able to police itself. Private security for the business said they found a cache of weapons, including a rifle, hidden in a nearby bush.

In the midst of the restlessness and drug abuse that arises in and around CHAZ, acts of kindness and community support also flourish. Donations from outside have poured in every day, supplying the camp with multiple food and supply stations. The “No Cop Co-Op,” the largest supply booth, distributes raw meat and fresh vegetables. Next to the tents in Cal Anderson Park, denizens have started rudimentary “farms” to grow lettuce and herbs. One farm is only for “black and indigenous folks.” Those looking to make new friends can sit on one of the many sofas at the “Decolonization Conversation Cafe.” Free coffee is served.

Left-wing political groups have capitalized on the opportunity to recruit new members. The Democratic Socialists of America features prominently in addition to the Seattle Revolutionary Socialists. But in the absence of any vetting, perhaps intentionally, extremists have also set up shop. One station that operates off-and-on distributes extremist anarchist-communist agitprop — the political ideology of Antifa. In one manual titled, “Blockade, Occupy, Strike Back,” instructions show how to use human shields against police, and make rudimentary “bombs” using light bulbs and paint.

Another booklet is titled “Against the Police and the Prison World They Maintain.” It features short essays on why police, capitalism and the state must be destroyed by any means necessary, including through violence. One section explains how the media are enemies used to “pacify” revolutionaries.

“Our contempt for the media is inextricable from our hatred of this entire world,” the booklet reads. Attacks on journalists who are accused of not toeing the line have become commonplace. On Monday, a masked Antifa militant pointed me out to her comrades and tried to assemble a mob. I left before I could be injured. The following day, a Fox News crew was forced out of the zone. 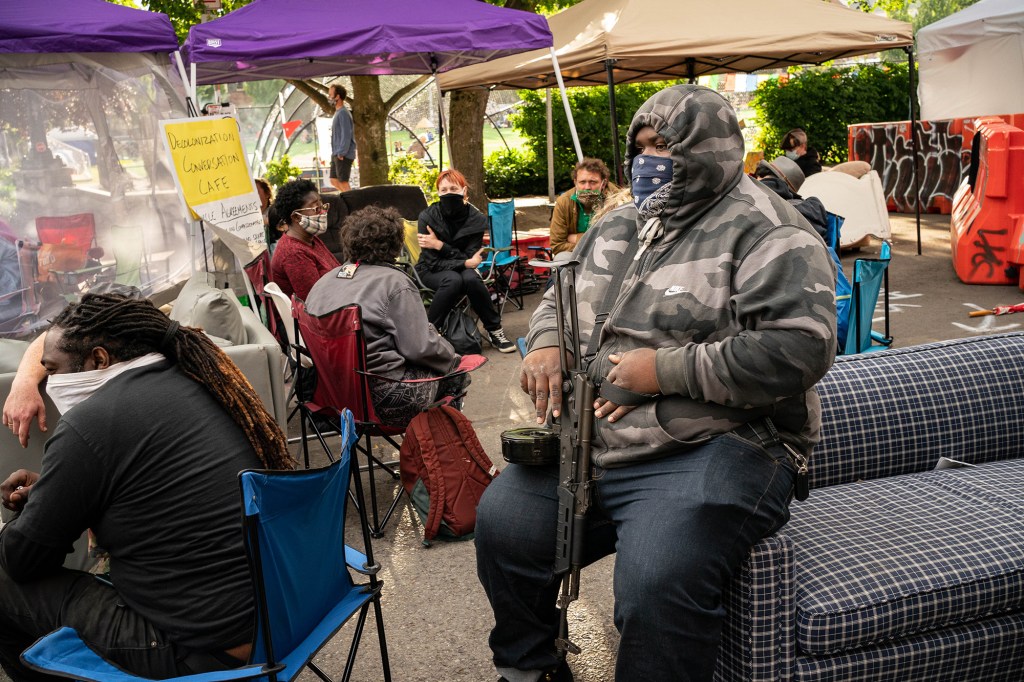 Knowing the danger journalists faced in CHAZ, I tried to blend in by dressing in the “black bloc” uniform popularized by Antifa. I avoided speaking to people on the chance they would recognize my voice. When they viewed me as one of their own, they were incredibly kind. They offered me water and snacks throughout the day. Suspicious “outsiders,” on the other hand, were immediately tailed by security.

Despite the pleas from those who live and work inside Capitol Hill for law and order to be restored, Seattle’s city council has determined that CHAZ should continue. On Tuesday, the city even provided upgrades to CHAZ, including street blockades that double as graffiti canvases, along with cleaning services and porta-potties.

It is difficult to decipher what CHAZ occupants want. Each faction, whether liberal, Marxist or anarchist, has their own agenda. But one online manifesto posted on Medium demands no less than the abolishment of the criminal justice system.

What will happen if demands aren’t met? Jaiden Grayson, a young black woman who has developed a large following in CHAZ, told a filmmaker: “Respond to the demands of the people or prepare to be met with any means necessary. … It’s not even a warning. I’m letting people know what comes next.”