‘We don’t see our futures’: A resurgent refugee crisis in Greece

GreekNewsOnDemand.com comments: It’s amazing how a Greek, like the one who wrote this article, could sit there and write PROPAGANDA against his…OWN PEOPLE! For example, when the “migrants” (ILLEGAL IMMIGRANTS!) “marched” last week, they didn’t just “march,” they went on a …MAYLAY ravaging everything in sight, even trying to BURN DOWN the Greek power company DEH! The went on vicious RIOTS and caused major damage there! Also, the “migrants” have been damaging Greeks’ properties and slaughtering their ANIMALS for crying out loud! And the term “anti-refugee vigilantism” is just plain DISHONEST and UNTRUTHFUL for the Al Jazeera readers. The correct term in anti-refugee…VIGILISM. SHAME ON Nick Paleologos and Al Jazeera for not mentioning this here and for PROPAGANDIZING THEIR READERS AT THE EXPENSE OF THE GREEK READERS!

Chios, Greece – Sabr al-Kolak knew his first few months in Europe would be difficult, but he was not prepared for what he found in Vial, a refugee camp on the Greek island of Chios, in the North Aegean Sea.

A 30-year-old from Palestine’s Gaza Strip, he arrived at the beginning of December to freezing weather after a perilous journey through Egypt to Turkey, from where he had previously tried three times to reach Greece.

His fourth attempt saw him packed aboard a flimsy dinghy from Turkey’s neighbouring coastal town of Cesme.

Vial, which houses 4,650 refugees, was overcrowded.

He went weeks without a shower and could not stomach the inedible food served, even after waiting in long queues for it.

The daily fights he witnessed added to his own personal traumas.

Today, a cold breeze sweeps through the tents, people with nothing else burn plastic bags and water bottles to stay warm, and small mountains of rubbish fleck the fields surrounding the sprawling camp.

“The problems here have multiplied,” al-Kolak tells Al Jazeera, “and we don’t see our futures ahead of us.”

With more than 60,000 people reaching the country last year, the Greek government is searching for ways to reduce arrivals and increase deportations – by the thousands. 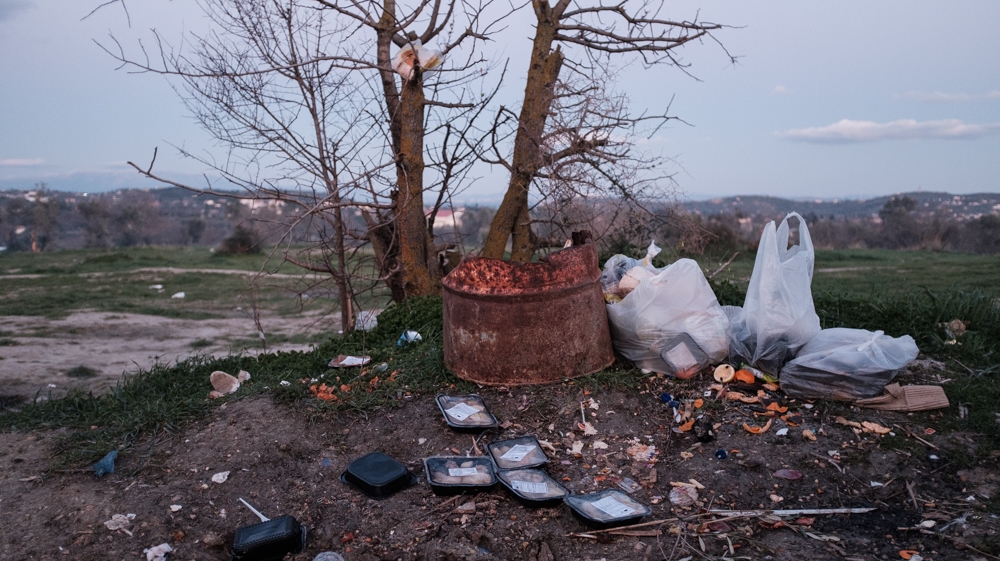 After food distribution, packaged meals can be found scattered around the rubbish bins in the camp. Many residents told Al Jazeera the food is often inedible or undercooked [Nick Paleologos/Al Jazeera]

On Monday, authorities said they would evoke emergency powers to move forward with plans to build closed detention centres on three islands hosting refugees – Chios, Lesbos and Samos, setting up holding facilities on Leros and Kos.

“These closed facilities will be governed by strict rules and limitations for movement for the occupants,” government spokesperson Stelios Petsas told reporters.

“Occupants will receive exit cards for controlled leave, while the structures will remain closed at night time.”

At time of publication, a Greek government spokesperson for migration had not replied to Al Jazeera’s request for comment.

The Vial camp is so overcrowded that many refugees and migrants live in makeshift structures in the fields surrounding the facility.

Residents in the camps and humanitarian groups told Al Jazeera that the number of refugees and migrants on the island are likely higher than the official tally.

Since coming to power in snap elections last July, the right-wing New Democracy government has promised to overhaul to the country’s refugee policies.

Under current rules, refugees are not allowed to travel from the islands to the mainland under a 2016 EU-Turkey deal, which was aimed at easing migratory flows.

But New Democracy now wants to increase transfers from the overcrowded islands to the mainland, as it pledges to ratchet up deportations by the thousands.

This will be achieved, officials have said, by pushing through legislation that activists and aid workers have warned would narrow the rights of asylum seekers.

“This new plan for the floating dams serves as a strong message regarding the politics of decreasing the flows (of asylum seekers),” said Notis Mitarakis, the minister for migration and asylum.

The proposal came amid heated tensions in Greece over the more than 106,000 refugees and migrants nationwide.

On Friday, the United Nations refugee agency (UNHCR) called on Greece to “intensify efforts” to decongest five Aegean islands, where more than 36,000 asylum seekers are stuck in camps with a combined capacity of 5,400 people.

Boris Cheshirkov, the UNHCR spokesperson in Athens, said that “conditions aren’t improving” in the camps, and “we can say that local communities are also exhausted”.

Last week on Lesbos, where more than 21,000 people live, around 2,000 asylum seekers from the notoriously overcrowded Moria camp and others marched. Police responded by firing tear gas and stun grenades.

Earlier this month, five Greeks and two foreigners were arrested near Moria. According to the police, they had threatened refugees and aid workers. Makeshift weapons such as wooden bats and metal rods were found in their possession.

In recent months, as thousands more refugees and migrants arrive in the country, several anti-refugee protests have broken out on the islands and mainland. 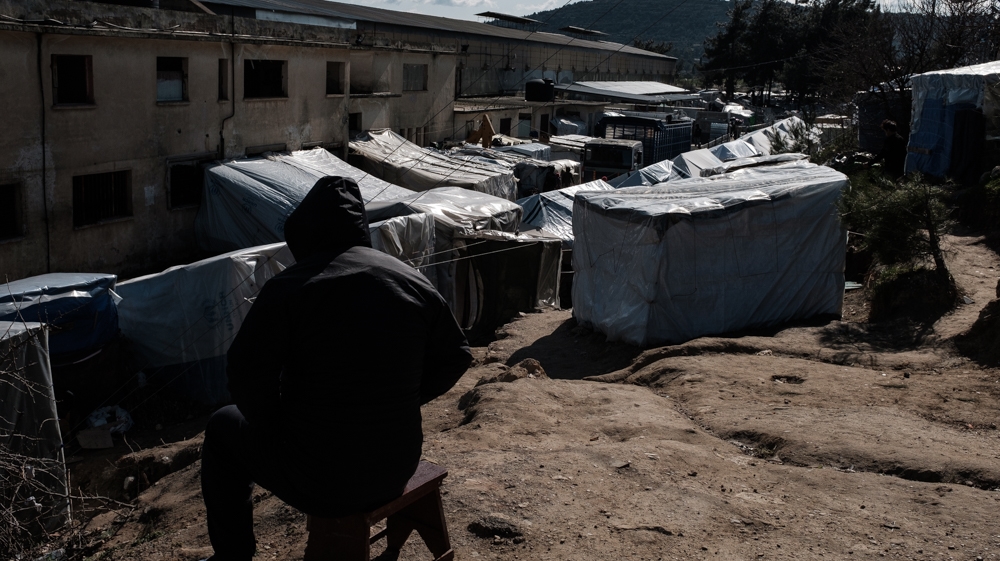 A man rests outside Vial camp, where more than 4,600 people live in a space made to accommodate 1,070 residents, according to UNHCR [Nick Paleologos/Al Jazeera]

In late January, thousands of Greeks took to the streets on islands in a general strike against the government’s refugee policies.

“If you look across the islands, the fact that thousands are staying in small tents, that the majority of the population are families, and most of them are Syrians and Afghans, it is a difficult time,” Cheshirkov told Al Jazeera. “The government is not enacting its plans quickly enough to address the situation.”

Ioannis Stevis, a Chios-based journalist and founder of Astraparis, a media outlet, said he worried that local far-right groups would seek to exploit residents’ frustration.

“Now the refugee crisis is at a crucial point,” he told Al Jazeera.

It would take only one spark, “and we could see the same things that happened on Lesbos,” he said, referring to the xenophobic street gangs who were arrested.

Meanwhile, refugee boats continue to arrive on the shores of several islands across the Aegean.

Following more than 60,000 arrivals last year, more than 4,100 refugees and migrants have reached Greek shores so far in 2020.

On Monday, the European Union’s external border agency, Frontex, intercepted a boat carrying 39 people near the northern city of Alexandroupoli, while another boat with 28 reached the shores of Chios.

On Chios, tensions have hit fever pitch, with locals in Chalkios, the village next to Vial, seething about what they perceive as government inaction.

On November 4, villagers blocked the main road to Vial, stopping aid workers and officials from entering the camp, demanding its closure.

For the refugees, their main concern is trying to stay warm.

Some chop wood for fires while others work to secure the ramshackle structures in which they live. Children play amid rubbish and dirty nappies scattered across the fields.

Refugees say as tensions rise, clashes between the camp residents have become common. They fear this will increase when the government proceeds with plans to put them in closed detention centres.

“People are suffocating here,” al-Kolak said. “We want to continue [the journey]. It doesn’t matter where as long as we have a life and work.”

ABOUT THE AUTHOR: Nick Paleologos