Earlier on Sunday, Iranian President Hassan Rouhani’s administration said that meetings have been scheduled for him with UK Prime Minister Boris Johnson and French President Emmanuel Macron on the sidelines of the United Nations General Assembly, as tensions have been spiralling in the wake of the attack on Saudi Aramco oil facilities.

Iran’s president, Hassan Rouhani, has stated he will propose a new initiative for the security of the Persian Gulf and the Sea of Oman at this week’s UN General Assembly, as Tehran and Washington have been sparring in the diplomatic arena in the wake of the drone attack on Saudi Arabia’s oil facilities.

“This year, we will be putting forward a plan at the United Nations, according to which the Islamic Republic of Iran – in cooperation with the regional countries – can ensure security in the Persian Gulf and the Sea of Oman with the help of the region’s countries,” Tasnim quoted the president as saying as he addressed a military parade in Tehran marking the 39th anniversary of the Iran-Iraq war.

“The security of the Persian Gulf, the Strait of Hormuz, and the Sea of Oman is indigenous. Foreign forces could cause problems and insecurity for our nation and region,” Rouhani added.

Rouhani said he will be attending the UN General Assembly in New York with the mottos “Coalition of Hope” and “Hormuz Peace Initiative”.

According to Hassan Rouhani, the “Coalition of Hope”, was conceived to exclude the US, rendering it unpalatable for Gulf states who see Washington as an ally and protector.

Iran’s foreign minister, Mohammad Javad Zarif, however, said opposition to foreign forces in the Gulf was not a precondition for joining the coalition, The Guardian reported.

According to Zarif, all permanent members of the UN Security Council were welcome to participate.

Tehran’s proposal comes at a time when the volatile Gulf region teeters on the brink of a major conflict; the US had previously invited Germany, France, Japan, Australia, and South Korea, among others, to police the Persian Gulf region against an alleged Iranian threat.

When US President Donald Trump was asked about Hassan Rouhani’s plan on Sunday, he responded that he was open to hearing about it.

“I’m always open. We’re doing our own thing with Iran,” Trump added, claiming “tremendous progress” had been made.

As a parade of world delegations converges on New York for the annual General Assembly summit this week, with tackling climate-related woes dominating the agenda, the spotlight will be on Washington and Iran, as a fear of military confrontation overshadows the gathering.

Threats and rhetoric have been lobbed by both sides in the wake of the recent attack on the Saudi oil industry.

Whether the leaders of the two countries will even meet remains in serious doubt as the risk of a new war in the Gulf hangs heavily over the summit.

US President Donald Trump told journalists he has no plans to meet with Iranian officials, including President Hassan Rouhani, during the session of the United Nations General Assembly.

US administration officials repeatedly said that the presidents might meet in order to ease tensions, claiming that Washington is ready for talks about a new nuclear deal without any preconditions.

Tehran, however, said that after the US withdrawal from the 2015 nuclear accord, the US cannot be trusted and has refused to negotiate another agreement.

The United States also refused to issue visas to a number of members of a delegation accompanying Iranian President Hassan Rouhani to the UN General Assembly in New York. 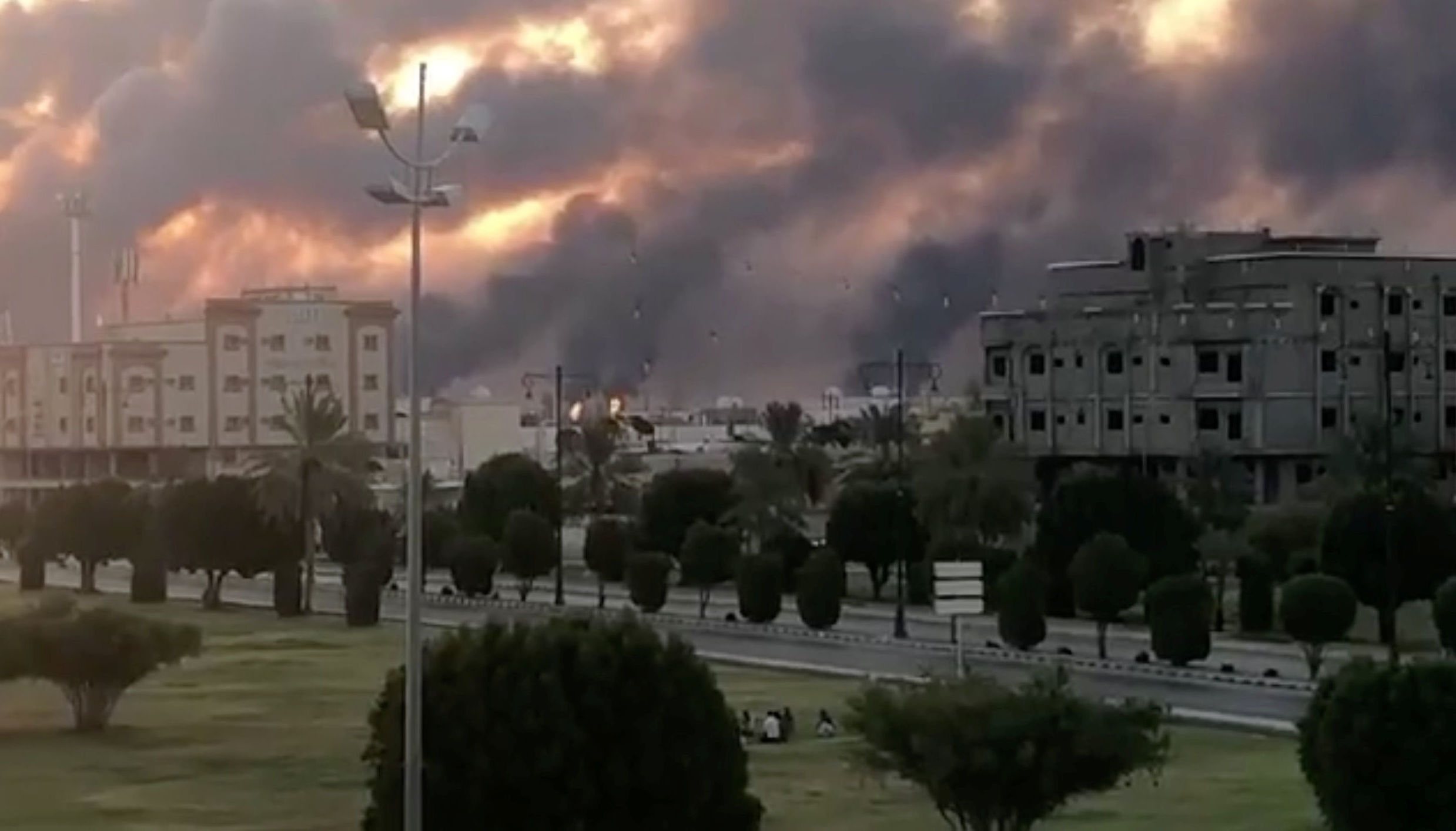 © REUTERS / VIDEOS OBTAINED BY REUTERS
Smoke is seen following a fire at an Aramco factory in Abqaiq, Saudi Arabia, September 14, 2019 in this picture obtained from social media

Responsibility for the incident, which partially disrupted oil production, was claimed by Yemen’s Houthi rebels. The Houthis had launched prior attacks on Saudi Aramco facilities this year which didn’t significantly affect production.

Yemen has been engulfed in an armed conflict between the government forces led by President Abd Rabbuh Mansur Hadi and the Houthi rebels for several years, with the Saudi-led coalition carrying out airstrikes against the Houthis at Hadi’s request since March 2015.

However, despite the claim of responsibility, Riyadh and Washington have pointed the finger of blame at Iran.

“It was done with Iranian weapons, therefore we hold Iran accountable for this attack.”

He added that Riyadh would not give its full response until after a UN investigation was completed. Prior Houthi drone attacks had prompted Riyadh to accuse Tehran of supplying the group with missiles and drones, according to Al Jazeera.
Iran’s foreign minister, Mohammad Javad Zarif, said Iran would not necessarily accept the results of a UN investigation, calling into question its impartiality.

Iran has said the strikes were launched from Yemen by the Houthi rebel movement, that formally claimed responsibility.

US President Donald Trump’s response to the attacks on Saudi Arabia has also included the introduction of more sanctions on Tehran.

The fresh sanctions target the Central Bank of Iran, the National Development Fund of Iran and Etemad Tejarate Pars Co, an Iranian company that US officials said is used to conceal financial transfers for Iranian military purchases, the US Treasury Department said in a statement.

“Having failed at “max pressure”, [Pompeo is] turning to “max deceit”,” the Iranian foreign minister, Javad Zarif, wrote on Twitter.

A senior commander from Iran’s Revolutionary Guards warned that the Islamic republic was ready for “full-fledged” war.

Tensions have spiralled in the Gulf since last year, when the US unilaterally withdrew from a 2015 deal that put curbs on Tehran’s nuclear programme, also known as the Joint Comprehensive Plan of Action.

The JCPOA was signed by Iran, China, France, Germany, Russia, the United Kingdom, the United States, and the European Union, and required Iran to scale back its nuclear programme and severely downgrade its uranium reserves in exchange for sanctions relief.

US President Donald Trump had long been critical of the agreement, claiming it had stopped short of curbing Iran’s ballistic missile programme. His reservations reflect those of Israeli Prime Minister Benjamin Netanyahu, who took credit for having convinced Washington to pull out of the deal in July, 2018.

Once out of the deal, Washington proceeded to slap sanctions on almost all major economic sectors of Iran in a bid to drive all of the country’s oil exports to zero and demanding that other countries stop buying it from Tehran.

The White House also announced a decision not to reissue waivers on Iranian oil after their expiration.

The situation in the region worsened over recent months following a spate of attacks on commercial tankers in the Gulf of Oman and Strait of Hormuz, for which the United States and its allies have blamed Iran.

Tehran has denied all accusations of involvement in the attacks. Greece ready to intervene against Turkey in Libya Ankara to Attack Syrian Forces, or So Says Erdogan: Duff on Press TV