Is Putin really in bed with the Rothschild Banking Cartel and international Zionism?

The media will not tell you the…REAL REASONS behind this whole Trump-Putin-Russian scandal! RESEARCH for YOURSELVES the truth! A good way to start is with these two below articles:

Read also the article “Exxon Mobil Seeks U.S. Sanctions Waiver for Oil Project in Russia” which tells you that when it comes to BIG OIL/CORPORATE INTERESTS, ALL of our “political differences” are pushed aside! For example, in this article we read:

HOUSTON — Exxon Mobil is pursuing a waiver from Treasury Department sanctions on Russia to drill in the Black Sea in a venture with Rosneft, the Russian state oil company, a former State Department official said on Wednesday. An oil industry official confirmed the account.

Read more on this here: https://www.nytimes.com/2017/04/19/business/energy-environment/exxon-mobil-russia-sanctions-waiver-oil.html

As we shall see further below, it is indeed the Russian oil company, Rosneft, that is tied in with the AMERICAN…EXXON MOBIL!…

The following simple graph will explain A LOT to you regarding the relationship between Putin, Russia and the Rothschilds and Rockefellers… 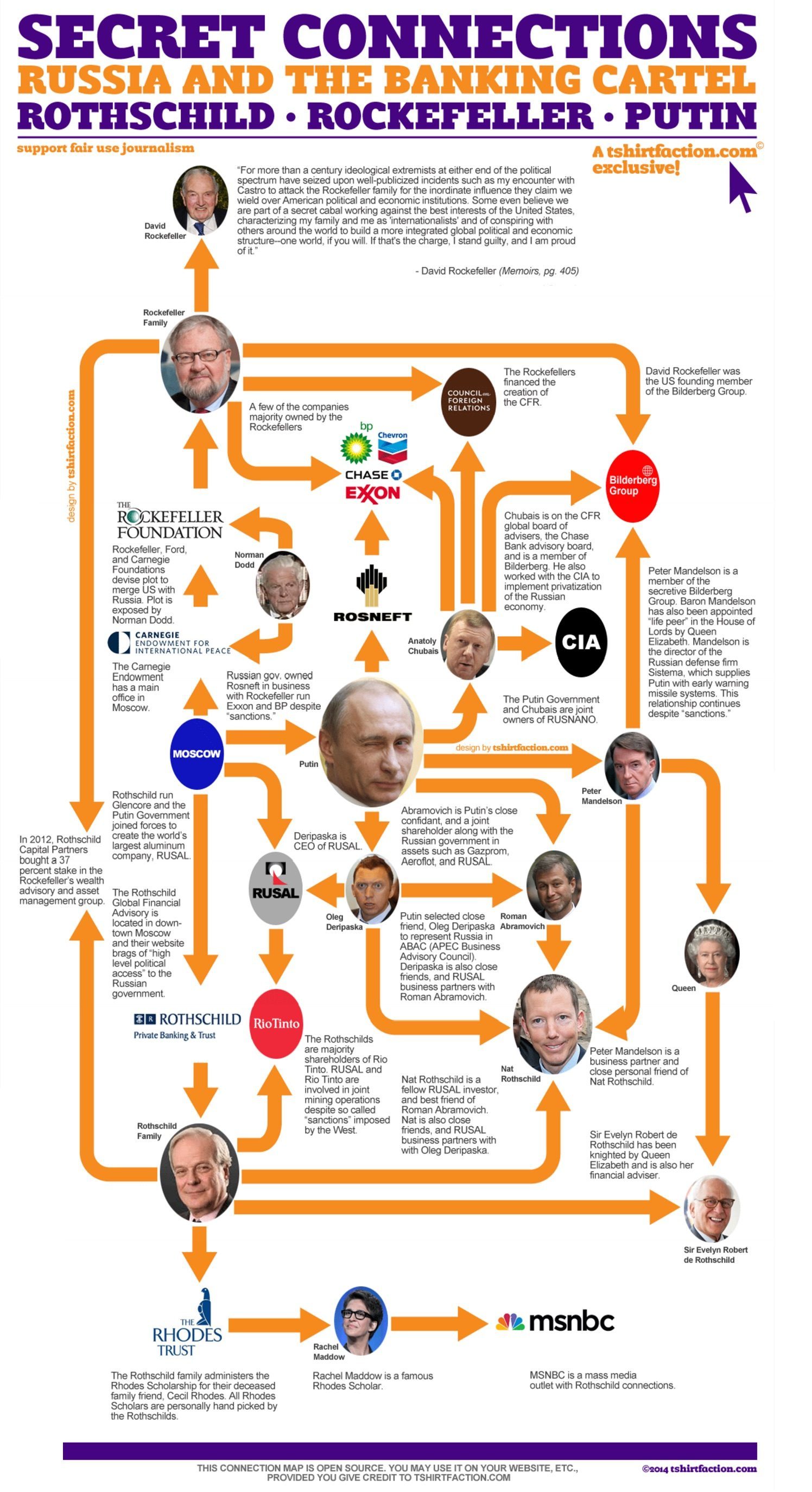 “For more than a century ideological extremists at either end of the political spectrum have seized upon well-publicized incidents such as my encounter with Castro to attack the Rockefeller family for the inordinate influence they claim we wield over American political and economic institutions. Some even believe we are part of a secret cabal working against the best interests of the United States, characterizing my family and me as ‘internationalists’ and of conspiring with others around the world to build a more integrated global political and economic structure–one world, if you will. If that’s the charge, I stand guilty, and I am proud of it.”  – David Rockefeller (Memoirs, pg. 405)

A few of the companies majority owned by the Rockefellers

The Rockefellers financed the creation of the CFR.

David Rockefeller was the US founding member of the Bilderberg Group.

Rockefeller, Ford, and Carnegie Foundations devise plot to merge US with Russia. Plot is exposed by Norman Dodd.

The Carnegie Endowment has a main office in Moscow.

Chubais is on the CFR global board of advisers, the Chase Bank advisory board. and a member of Bilderberg. He also worked with the CIA to implement privatization of the Russian economy.

Peter Mandelson is a member of the secretive Bilderberg Group. Baron Mandelson has also been appointed “life peer” in the House of Lords by Queen Elizabeth. Mandelson is the director of the Russian defense firm Sistema, which supplies Putin with early warning missile systems. This relationship continues despite “sanctions.”

The Putin Government and Chubais are joint owners of RUSNANO.

The Rothschild Global Financial Advisory is located in downtown Moscow and their website brags of “high level political access” to the Russian government.

Deripaska is CEO of RUSAL.

Abramovich is Putin’s close confidant, and a joint shareholder along with the Russian government in assets such as Gazprom, Aeroflot, and RUSAL.

The Rothschild family are majority shareholders of Rio Tinto. RUSAL and Rio Tinto are involved in joint mining operations despite so called “sanctions” imposed by the West.

The Rothschild family are majority shareholders of Rio Tinto. RUSAL and Rio Tinto are involved in joint mining operations despite so called “sanctions” imposed by the West.

Nat Rothschild is a fellow RUSAL investor, and best freind of Roman Abramovich.Nat is also close friends, and RUSAL business partners with with Oleg Deripaska.

Peter Mandelson is a business partner and close personal friend of Nat Rothschild.

Sir Evelyn Robert de Rothschild has been knighted by Queen Elizabeth and is also her financial adviser.

MSNBC is a mass media outlet with Rothschild connections. FRANCE MAY LOWER AGE OF CONSENT TO 13, MAN ACQUITTED OF RAPING 11-YEAR-OLD One thought on “Is Putin really in bed with the Rothschild Banking Cartel and international Zionism?”